I am happy that an essay I wrote was distributed by the IUSSP (International Union for the Scientific Study of Population). It was then picked up and redistributed to the PERN (Population-Environment Research Network). Through the miracle of digital communications several thousand people have been able to read this–without a single piece of paper being used!

The essay was written in response to one that was published by IUSSP and written by a wonderful person, David Lam. David is optimistic about the future of the planet to support 4 billion more people. I am concerned that we have already caused so much damage and believe that the degradation will worsen unless we slow our population growth rate, and decrease our consumption. Dr. Lam’s essay is available at:Â http://www.niussp.org/article/the-worlds-next-4-billion-people-will-differ-from-the-previous-4-billion/

My essay is below, somewhat shortened by excluding information about a wager that Dr. Lam has with another friend, Stan Becker. The complete essay is available at:Â http://www.niussp.org/article/the-world-in-which-the-next-4-billion-people-will-live/

The world in which the next 4 billion people will live

I was pleased to read Professor David Lamâ€™s N-IUSSP essay â€œThe worldâ€™s next 4 billion people will differ from the previous 4 billionâ€ (Lam 2017). He outlines past, present and projected future population growth. He points out that much of the population growth will occur in Africa, and that a higher proportion will be older, if current trends continue. He also wonders â€œâ€¦whether the world can absorb another 4 billion people.â€

As a demographer, it is appropriate that Lam should focus on humans. However, I fear that he has largely ignored the environment in which we live when he wrote this essay. I have difficultyÂ accepting his statement:Â â€œAn important source of optimism about the worldâ€™s ability to support an additionalÂ 4 billion people is the success in supporting the previous 4 billion.â€ My concern is that the past 4 billion have degraded natural world upon which we depend, and that this degradation will make the world much less welcoming to the next 4 billion.

A changing world (not always for the better)

I agree that the next 4 billion people will differ from the previous 4 billion as professor Lam explains, but so will the world in which those people live. Dr. Norman Borlaug understood this when he stated, in his Nobel Prize acceptance speech of 1970:Â â€œThe green revolution has won a temporary success in manâ€™s war against hunger and deprivation; it has given man a breathing space. If fully implemented, the revolution can provide sufficient food for sustenance during the next three decades. But the frightening power of human reproduction must also be curbed; otherwise the success of the green revolution will be ephemeral only. Most people still fail to comprehend the magnitude and menace of the â€˜Population Monsterâ€™. â€¦Since man is potentially a rational being, however, I am confident that within the next two decades he will recognize the self-destructive course he steers along the road of irresponsible population growthâ€¦.â€

Borlaugâ€™s three decades have passed and we have seen the side effects of theÂ â€œgreen revolutionâ€â€”decreasing soil quality, decreasing forest coverage, increasing pollution (including hugeÂ anoxicÂ ocean dead zones), rapid loss of species and, perhaps worst of all, climate change. The â€œgreen revolutionâ€ has allowed us to feed more people so that, finally, fewer people go to bed hungry. However, more food has made it possible for our human population to grow at a faster rate, despite monumental increases in reproductive health and family planning.

How can we quantify human impact?

The formula popularized by Ehrlich and Holdren (1974) gives an idea of our human impact on the earth: I = P x A x T (I = impact; P = population; A = affluence (or consumption); T = technology). Letâ€™s look at these factors in the opposite order. We are starting to develop technology to decrease our impact, such as solar panels and more efficient vehicles, but the benefit so far from new technology is relatively small. As for the A factor, affluence, I have met very few people who actually wish to decrease their consumption. There is too much social pressure for people to increase their consumption. Furthermore, leading an affluent life is more comfortable so it has become the goal of billions of people.

Slowing population growth, on the other hand, is the â€œlow hanging fruitâ€ to reduce human impact P. An estimated 225 million women worldwide wish to avoid pregnancy but are not using effective contraception (Singh et al. 2014). Moreover, having fewer offspring has been shown to be the most effective way of reducing impact, using greenhouse gas emissions as a measure of impact (Murtaugh & Schlax 2009).

How can we determine to what extent human activities are degrading our planet? The best measure of planetary sustainability is the Ecological Footprint. This shows that humans areÂ already overtaxing the planet. Indeed, it would take 1.6 planets Earth to support our human population sustainably the way we are currently living (Figure 1). Unfortunately, there is only one Earth. 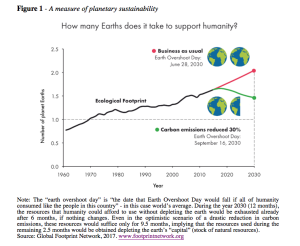 This degradation of our life support system will become a grave problem as the next 4 billion people are added. There will be more people to share the resources and more people to contaminate the world with their waste products. The most visible of the latter is the climate change caused by carbon dioxide from our use of fossil fuels, but there are many other examples. Already food production systems are stretched to keep up with the addition of about 80 million people each year. With global warming, the outlook for increases in food production in some African states is poor. Feeding even 9 billion by midcentury will clearly be a major challenge.

We have beenÂ fortunate to live in this era, but I fear that the next 4 billion people will live in a world that is very different, and not so enjoyable. Current inhabitants must think more about preserving the earth for future generations.